Suppose your company’s credit took a turn for the worse. What would happen? Well, investors would pay less for your company’s debts, holding all else constant. But if you’re measuring those liabilities at fair value, your earnings would increase. Meanwhile, a company faring well would see losses due to the higher value of their debt.

That counterintuitive effect is a curiosity of how liabilities measured at fair value are accounted for under ASC 820. When it comes to dealing with its own credit risk, many a company has been confused by the changes in liabilities that could not be transferred or settled before maturity, when they were retired at face value.

But that’s changing. According to revised guidance issued by the FASB, the portion of the value change due to changes in credit risk will instead be classified in other comprehensive income (OCI). In addition, the new standard specifically seeks to exclude changes due to market risk, such as changes to the risk-free or other benchmark rate. Readers may believe that excluding this from net income may make this value more consistent with actual business impacts.

Adoption of the revised rule is required as of fiscal years beginning after December 15, 2017, but early adoption is permitted.

Reviewing the Valuation Drivers of Liabilities

To understand how the new standard affects reporting, let’s start with a brief summary of liability valuation.

Holding the amount of the payout constant, there are two key components of liability valuation: time and interest rate. As time passes, and the payment of the liability shortens, the value of the liability increases. From a practical perspective, this means that just by accounting for the credit risk and the time value of money, the balance sheet value of a company’s liabilities will increase over time (Figure 1).

The other key driver of liability fair value is the discount rate. A higher discount rate means a higher required return on an investment, resulting in a lower fair value today given the same terminal value (Figure 2). 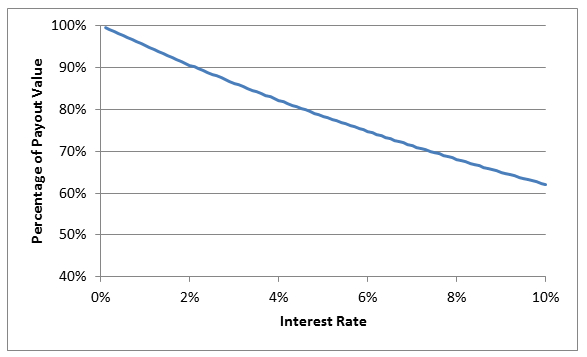 Combining the Impact of Time and Discount Rate

In financial reporting, as in reality, we lack the key ability relied on in the previous section—to hold one variable constant. Briefly stated, any change in discount rates between periods will be recognized over time. As a result, how time and discount rate interplay is crucial to understanding the impact of the new guidance.

The crux of our analysis is that the impact of changes in the discount rate is larger depending on the amount of time remaining. Therefore, if there is a long time remaining on a liability, an interest rate change—including one due to credit risk—may have a large impact on value. On the other hand, if a liability is nearing expiration, even a large change in interest rate may have little or no impact on the value, given the short discounting period. Figure 3 shows the higher impact of rates at longer time periods. 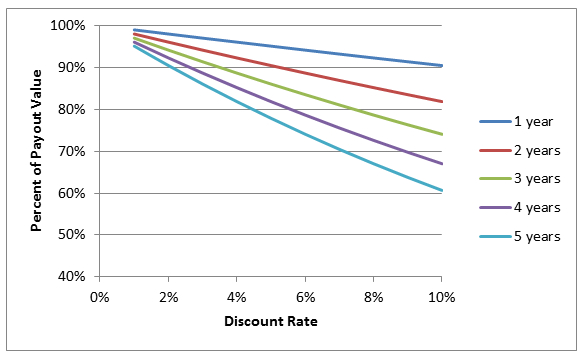 In the context of the new guidance, this means that the impact of firm-specific component of interest rate movements will be larger if it’s assumed to happen at the beginning of a reporting period and smaller if it’s taken at the end.

Here’s an example. Suppose it’s Q4 of the year 20X0. A company has $10 million liability expiring at the end of Q4 20X1 (i.e., a one-year liability). In Q1 20X1, the interest rate will increase from 5% to 6%. Table 1 shows the fair values of this $10 million liability as a function of different discount rates and expiration.

Under the old accounting, the change to net income would be the difference due to time and credit combined of $50,000. However, bifurcation can result in either of the following under ASU 2016-01:

In other words, by incorporating the effect of credit first, the company faces a larger drop in NI, offset by a larger drop in OCI. With larger liabilities and large credit changes, this impact could result in a significant difference in the net income impact of such changes.

As with all accounting determinations that affect net income, companies should be careful to avoid the appearance of “gaming” these changes (that is, applying larger net income adjustments when they’re positive and smaller when they’re negative). Consider establishing a policy to apply consistently, or otherwise be consistent with the methodology adopted in prior periods under the new guidance.

Companies will also need to choose a baseline rate. The guidance notes that you can use changes in a risk-free or benchmark interest rate. Be aware that selecting a benchmark rate that most accurately moves with your own borrowing rate (such as an index curve matching your industry and credit rating) will result in identification of changes purely due to credit. As an example, consider a BBB-rated company whose credit spread is always equal to the BBB industrial rate. If this company uses a risk-free rate as a benchmark and the spread between BBB and the risk-free rate changes, it will be treated as company specific even though it was consistent with a different and more indicative benchmark.

Preparing for the Change

In this case, early adoption is permitted, so companies can actively start making this change to their NI and OCI calculations. We suggest that companies understand the impact of their credit by identifying the population of liabilities measured at fair value and run sample calculations so they know the effect of moves in their credit quality. Companies should also select an appropriate benchmark rate to understand the effect of the changes. Finally, companies should develop and document a methodology to use on these changes.

Design Features that Drive the Fair Value of a Convertible Security

Exposure Draft on the Valuation of Contingent Consideration (Earnouts): Our Comments

Anti-Dilution Provisions in a Warrant Offering