by David Outlaw and Therese Sebastian

Employee stock purchase plans (ESPPs) are one of the hottest topics in the equity compensation space right now.

This is part of a longer-term shift in the thinking around ESPPs. They began as a key compensation element before and during the tech boom of the 1990s. Then they fell somewhat out of favor as many companies reacted (perhaps overreacted) to the change in accounting rules in 2006 that caused ESPPs to be a larger expense on the P&L.

Now, companies are again realizing the power of ESPPs as a cost-effective way to reward, motivate, and engage employees. New, high-growth startups are launching these plans alongside their IPOs to kickstart employee ownership and allow broad participation in early growth. And blue chips, perhaps having dialed back their plans a decade ago, are reinvigorating their ESPP with more employee-friendly features to remain competitive in the war for talent.

This trend raises a big question on everyone’s mind. How do companies design their ESPPs to maximize employee benefit at a reasonable cost? Unfortunately, detailed statistics are hard to come by.

So to answer this question, we went straight to the source and analyzed SEC disclosures for companies with compensatory ESPPs. We focused on companies on the West Coast, where ESPPs are traditionally more common and more generous than elsewhere—and which, historically, has been at the leading edge of equity trends. After analyzing a sample of 150 firms from San Diego to Seattle, here are the main lessons we learned.

The most direct and visible feature contributing to an ESPP’s benefit is the discount at which employees can purchase stock. For tax-qualified plans, the maximum possible discount is 15%…and that’s the discount offered by the large majority of company plans. 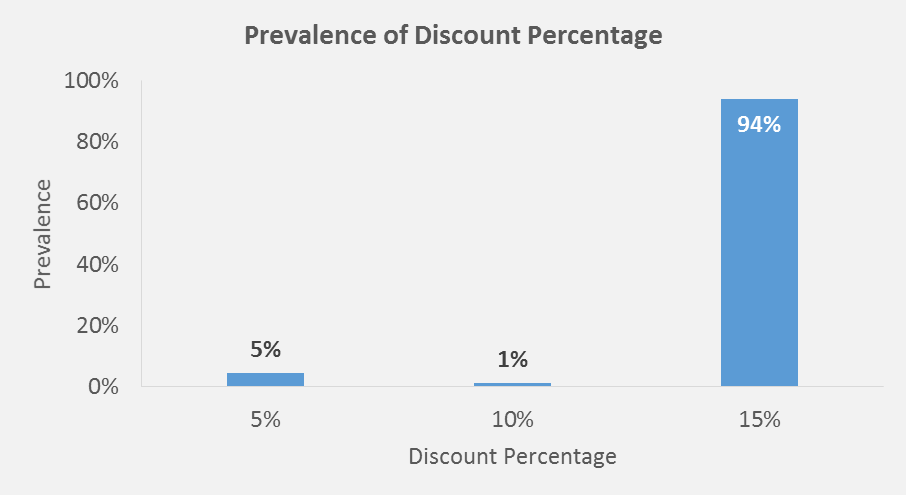 What does this mean for companies implementing an ESPP? A 15% discount is table stakes. You can’t go higher (at least while maintaining tax qualification, if that’s an important consideration). But any lower, and you won’t keep pace with the competition.

2. A Lookback is Standard…and a Longer One is Better

Another overwhelmingly common feature among the firms we analyzed is a lookback feature. These allow stock to be purchased at the lower of the stock prices at the beginning or end of the offering.

Lookbacks allow employees to benefit from volatile stock prices by protecting on the downside and gaining on the upside. And they create enormous benefits in a growth scenario by locking in a low purchase price. What’s more, these benefits are larger with longer offering periods because the stock price has more of a chance to run up. 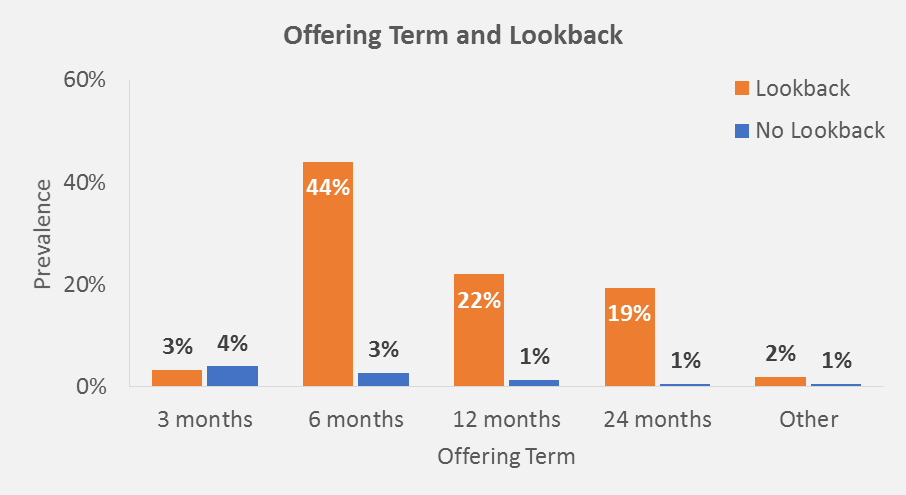 We see this expectation manifested in the data. Over 90% of the companies we analyzed have a lookback feature. The most common offering period is six months, but periods of up to two years are fairly prevalent.

3. Reset and Rollover Features are Not Uncommon

One of the most powerful employee-favorable ESPP features is the reset or rollover. These features can be added to plans that have multiple purchases within an offering (most commonly, for plans that have four six-month purchases in a 24-month offering). In these plans, the lookback concept is extended to another level: When the price goes down during a purchase period, the lookback price for future purchases is “reset” to that lower price. This means that employees are always in the most favorable possible position for their purchase.

If this sounds complicated, it certainly can be (which is why we created this issue brief on financial reporting for complex ESPPs). But that should not dissuade you from implementing the right plan to attract and retain talent. In fact, the data shows that these plans are not as uncommon as you might think. 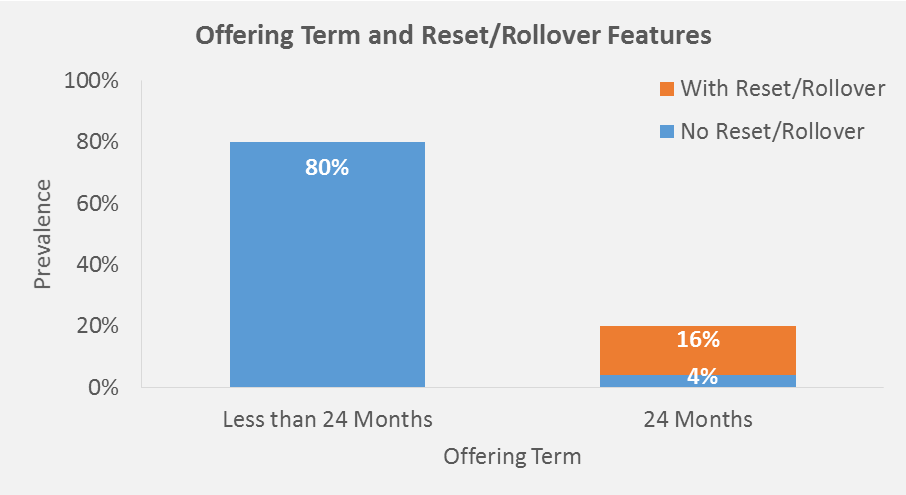 This indicates that these sorts of features should absolutely be on the table as you weigh pros and cons of competing designs. There are plenty of companies in the market that realistically do offer these lucrative plans. Even if they’re not common in your industry, these designs can be a major differentiator as part of your total rewards package.

4. There is a Happy Medium for Contribution Changes

Contribution changes are another feature that can potentially introduce complexity. On one hand, allowing endless contribution changes can create major administrative headaches that can lead to mistakes (which can potentially disqualify favorable tax treatment) as well as modification accounting that can increase costs unpredictably. On the other hand, asking employees to tie up their paychecks for an extended period of time—especially for longer-term offerings—might not be palatable.

Fortunately, this isn’t an all-or-nothing decision. Companies have two levers to pull that can limit the impact. First is allowing only withholding decreases, not increases. The administrative burden remains in these cases, but no incremental accounting charges are possible. Second is to limit the frequency of changes per person to one or two times per offering. This reduces the administrative burden, especially when the timing of those changes is limited to certain mid-offering windows. 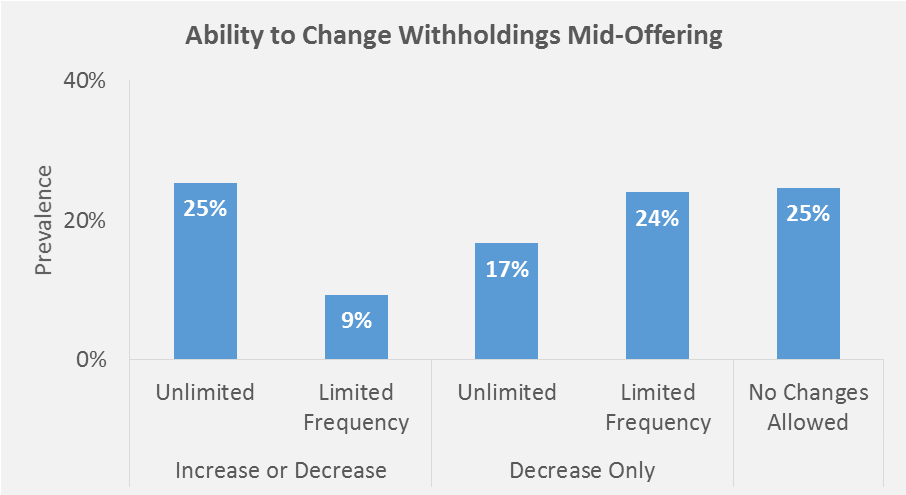 Our analysis shows that while plenty of the studied companies go to one end of the spectrum or the other, allowing unlimited or zero changes, half of companies find a happy medium. Over 40% only allow decreases in contributions, and around one-third limit the frequency of changes.

In a perfect world, every company could offer a lucrative ESPP with a high discount, long offerings, a reset feature, and plenty of employee flexibility. As with any compensation program, however, cost is a constraining factor that must be considered.

Fortunately, ESPPs perform well in this area. They cost firms only a fraction of what a broad-based RSU grant would cost due to the employee contributions, and they arguably create more employee engagement in doing so. By actively making a decision to participate, employees literally “buy in” to the company’s performance instead of passively receiving a grant that may be viewed as an entitlement or a lottery ticket. Even if employees sell shares rather than hold them long-term, the continuous cycle of an ESPP means that they always are invested in how the stock performs.

In the companies we analyzed, ESPP expense averaged about 13% of total stock-based compensation expense. The absolute cost in dollars varied by plan type, naturally, but the primary cost driver was the size of the company (and therefore the size of the participating population). Cost is generally low for smaller or mid-size companies, but even the higher cost for large companies is smaller relative to size. 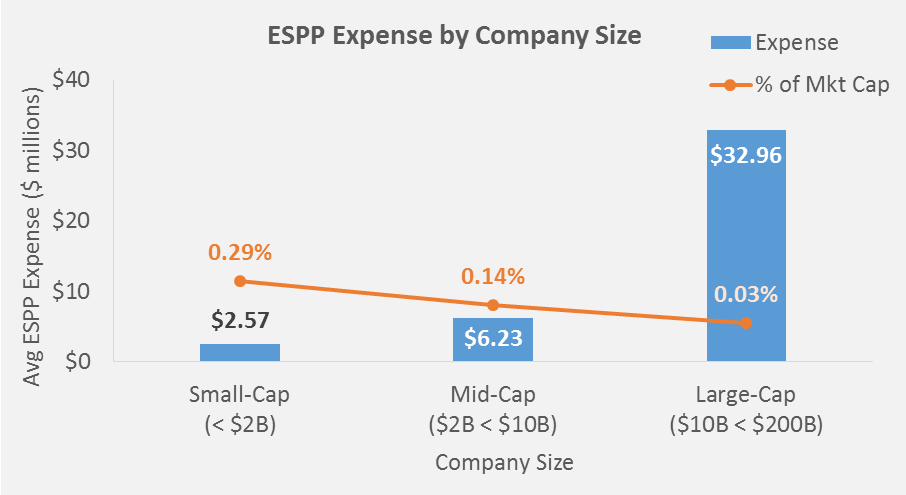 All of this goes to show the importance of modeling. The averages here don’t show all of the firm-by-firm variability in cost, but a critical step of any plan design is to model costs and benefits in a granular way. We recommend always considering at least three designs—more lucrative, less lucrative, and somewhere in between—to make an informed decision about what you can afford. We often find that our clients are surprised by how some employee-friendly features add very little cost to the program.

If you’re in the process of—or even just starting to consider—designing an ESPP, we hope you find these insights useful. Please contact us if there are any concepts here that you would like to discuss further.

ESPPs that Work for You: Top Five Lessons Learned