The SEC Reopened Comments to the Dodd-Frank Pay Ratio Rule. Here’s What the Public Said.

As promised, the Trump administration has been pushing for diminished regulation across the board. A primary target is the Dodd-Frank Wall-Street Reform and Consumer Protection Act of 2010, which President Trump called a “disaster.”

One aspect of Dodd-Frank that’s in the crosshairs is the CEO pay ratio disclosure mandate. It’s supposed to take effect in the 2017 fiscal year, but the SEC could alter it. Indeed, on February 6 acting SEC chairman Michael Piwowar issued a statement reopening public comments on the rule. The objective was to surface “unanticipated compliance difficulties that may hinder [issuers] in meeting the reporting deadline.” The comment period lasted 45 days.

In the meantime, the SEC received 13,533 copies of a form letter expressing opposition to a delay or rollback. However, the agency also received 181 original letters that are pertinent to pay ratio disclosure. Of this group, 149 favor keeping the rule as is. Those in favor include private and institutional investors, advocacy groups, religious organizations, labor unions, and academics—along with citizens concerned about the growing wage gap. Another three letters support the rule, but ask for changes to reduce the burden faced by companies in developing this disclosure. 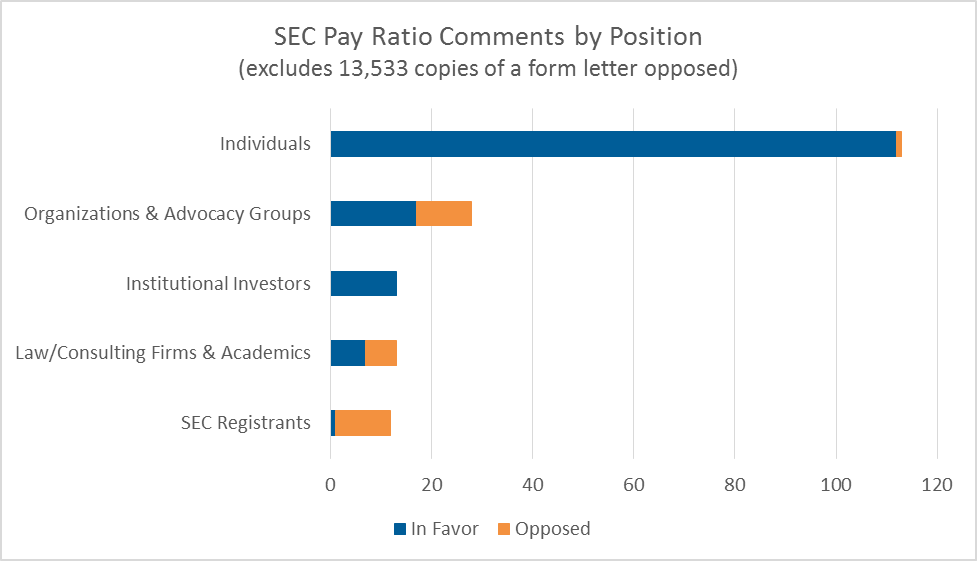 
Why do so many commenters want to keep the rule? Investors, both private and institutional, say that pay ratio:

Some even indicate they would hesitate to hold shares in a company that struggled to calculate its median salary.

A key concern among commenters is the effect a high pay ratio could have on employee morale. Underscoring this concern, University of Nebraska faculty submitted a study that links high CEO pay with morale problems in situations where employees believe the pay has less to do with merit than with the CEO’s influence over board members.

Two letters from members of Congress accuse the SEC of acting outside of the public interest by using resources to reopen the comment period for a rule that already received significant public support. One of the letters, from Elizabeth Warren and eight other Democratic senators, notes that among the 350 largest US companies, CEO pay has grown 997% while pay for non-supervisory employees has grown less than 11%. The senators ask the SEC to provide an “estimate of the cost of [their] actions to open a new public comment period and to devote staff resources to reconsideration of the rule.”

On the other side of the issue, 29 letters—all from companies, organizations composed of companies, or law firms—weigh in against the pay ratio rule. Their concerns are that pay ratio:

One public company CEO points out that “various commenters on the rule have publicly indicated their intention to attempt to use the CEO pay ratio as a tool to compare companies when making investment decisions.” (The SEC has indicated/stated within the rule that the purpose of pay ratio is not to “facilitate a comparison of this information from one registrant to another.”) Indeed, we’ve seen that attributes like organizational structure, part-time and seasonal employment, international makeup of the workforce, and even date of pay ratio calculation can have a dramatic effect on the ratio. That’s without any change to the pay of either the CEO or of employees in similar roles, which shows the difficulty of comparing these numbers across companies.

Other companies reason that all pertinent investor information related to executive pay is already available. In this view, revealing the median salary merely invites faulty comparisons or internal discord among employees who discover their pay is below the median. Another argument is that once median salary becomes public, prospective employees may use this metric to determine “better-paying companies” without taking into account all of the factors that may affect median compensation. Companies that pay a fair wage could potentially face consequences in the labor market because international or non-full time employees drag their median salary down.

The takeaway? The SEC will have to weigh whether the purported benefits to investors are worth the expected compliance costs to corporations. Those incurring the costs say no, while investors seeking transparency and those concerned about excessive executive pay say yes. Either way, while reopening the comment period on an established rule indicates that pay ratio is a likely target for reform, it’s not a done deal.

As you would imagine, the situation in Washington is fluid. But there are a couple of possible hurdles to changing the rule. The first is procedural. With only two Republican commissioners, the lone Democrat has the ability to block action by preventing a quorum. So in order to force any movement, the Republicans must first nominate, confirm, and swear in another commissioner—a process that doesn’t happen overnight. And even then, any major changes to the rule are likely to trigger judicial review or lawsuits that would delay the effect of those changes.

The second hurdle is political. While the administration surely is not a big supporter of the rule, forcing repeal would trigger a backlash from other parties in Washington and in the media. Without significant tax or other tangible burdens attached to the pay ratio, it may be sufficiently benign as to not be worth a fight at the moment.

More information is likely to become available this summer as the Treasury secretary’s review of financial regulations reaches its first milestones. But in any case, it’s far from clear that the administration will prioritize pay ratio highly enough to make significant changes this year.

Given this, companies should proceed with their 2018 disclosures rather than risk delay on what remains, for now, a highly visible mandate. Check back with us as the 2018 proxy season gets closer. We’ll post what you need to know about this regulation as more information becomes available.